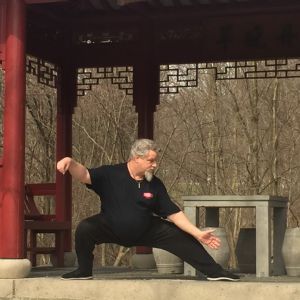 Every so often someone comes along who's skill and comprehension are baffling. Adam Mizner is one of those rare people who's meditative attainment and martial attainment are of a very high order! It is extremely rare to find a practitioner with both to a very deep level of comprehension. I have intentionally waited several days to make a testimonial because I didn't want it to sound contrived or starstruck. This is a very sincere statement that I make when I tell you Adam Mizner's skill is of such a high order that he easily controlled all comers. When I endeavored to explore his "defects", he clearly explained and demonstrated his reasoning for all of these and showed me the advantages open heartedly. His open heartedness is second only to his clarity. When I questioned him regarding his clear instruction his response was "the purpose of meditation is to bring clarity, 20 years of meditation have brought me clarity." I highly recommend that you take advantage of this clarity as it will absolutely enhance your art as well as your interaction with it. Adam Mizner's is that rare individual who raises the bar for Taijiquan and challenges your definition of the Art as well as the depth of your ability to change... His ability to use his art are way beyond Push Hands and extend into a natural fighting skill that is nurtured and born from his clear and multi-dimensional Gong Fa. Just for the record, Song trumps structure and technique easily to the point of obsolescence . Several of the most senior practitioners actually whispered to me that " he may be the second coming of Zheng Man Qing." I could not argue the point. I highly recommend that you don't embarrass your self with out trying to feel him first or all of that "woo woo" you are talking about may be the sound of the train that is running you over...